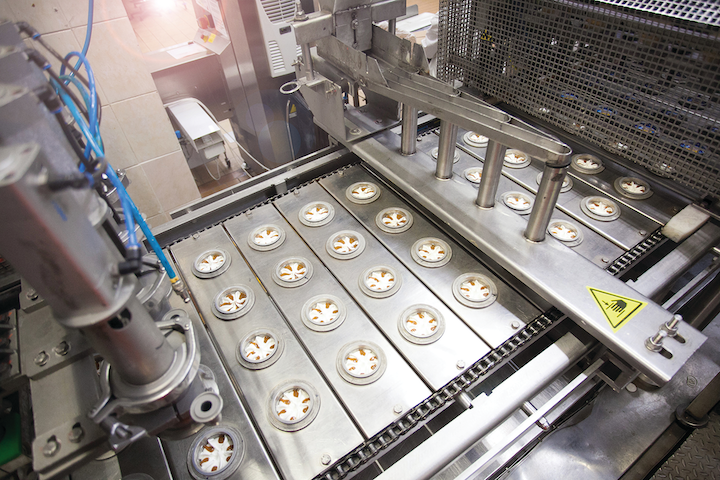 Ice cream is injected with air prior to freezing to give it a creamy texture. All images courtesy of Endress+Hauser

Depending on the product under scrutiny, food and beverage plant managers may have to meet the requirements of the Food & Drug Administration (FDA), European Union (EU) and other agencies. Applicable regulations may include cGMP, GFSI, ISO, HACCP, SQF, SID and others.

These requirements and regulations specify proper ingredients, procedures and sanitary conditions. In many cases, compliance with these regulations requires lab analyses during and after production. 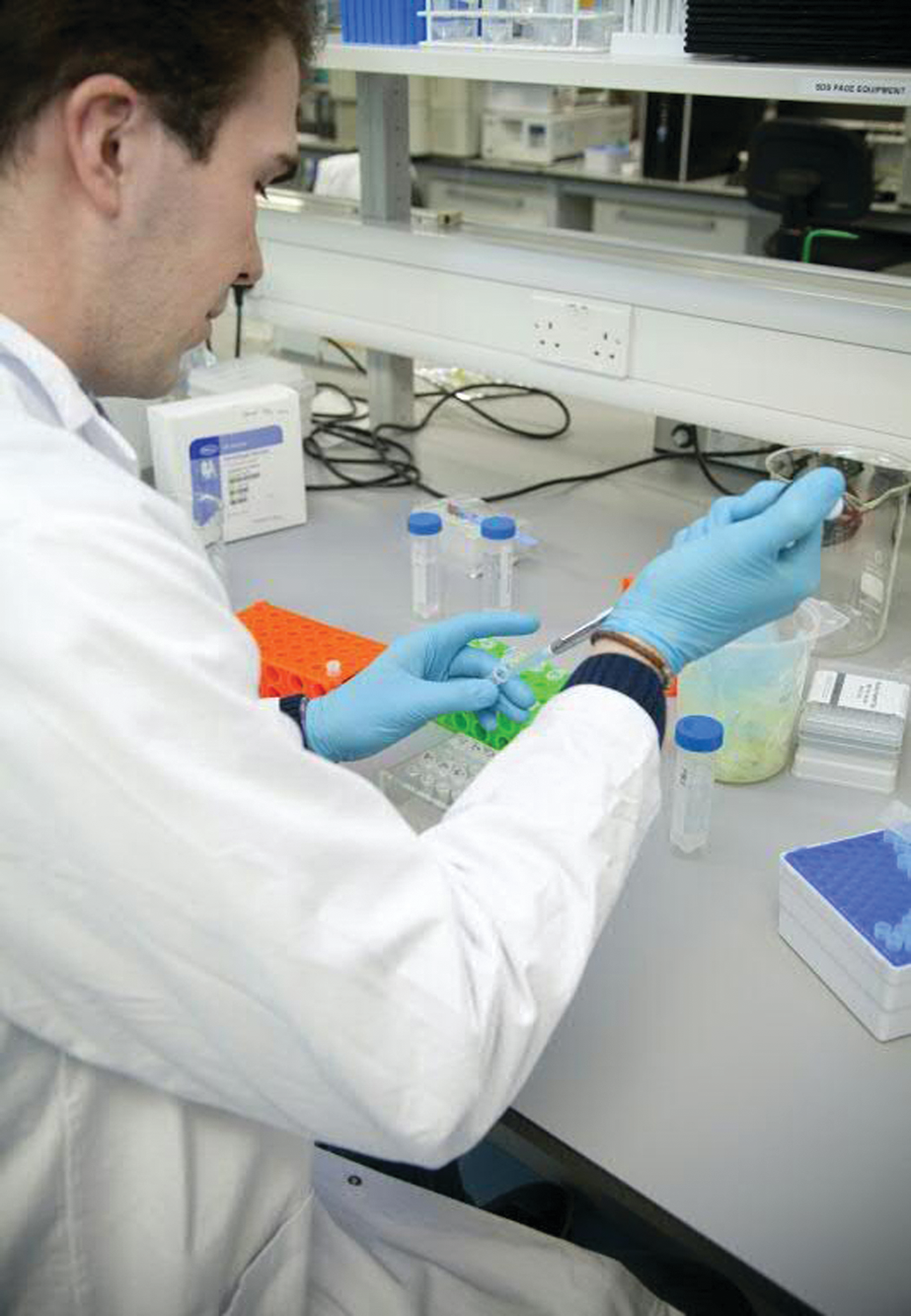 Figure 1. Hours can elapse from the time a sample is taken to its analysis.

To perform a lab test (Figure 1), technicians periodically take a grab sample, take it to an on-site facility for analysis and communicate the result to plant personnel. Operators and maintenance personnel then make adjustments and corrections to improve control of the process, or make repairs when required.

This presents problems because lab analyses aren’t done in real time, are time-consuming, are labor intensive and raise the possibility for manual errors. Even if it takes at least 30 minutes to grab a sample, analyze it and report the results — this information represents where the process was 30 minutes ago — not now. The result could be a spoiled batch.

If the measurement had been done inline, a sudden deviation would be detected. Inline measurements can also be used to enable automatic closed-loop control, which is not possible with manual measurements. A typical closed-loop control strategy uses an inline measurement as the process variable input to a proportional-integral-derivative (PID) controller. The controller output drives some type of a regulating device, such as a control valve. The PID controller continually and automatically adjusts its output to maintain the desired value close to the setpoint.

Checking for product purity and quality is important, but so is meeting the expectations of consumers for proper taste and texture.

For example, cold and hot wort measurements in a brewery are important to ensure best quality and yield, as well as taste.

Viscosity measurements can test for consistency of the batter coating for beans, onions, meat and poultry. Measuring the Brix of tomato paste can help control the amount of paste to be added during cutting.

For example, the flowmeter’s highly accurate density funct function can be used to measure Brix and Plato values to ensure the quality of ingredients. Viscosity readings provide continuous measurement to minimize the chance of producing off-spec product.

Diagnostics built into a Coriolis flowmeter can help identify process problems. For example, entrained air in a line can affect product quality. An operator needs to know if external air is being drawn in through a leaking seal, a cavitating pump or an empty balance tank. 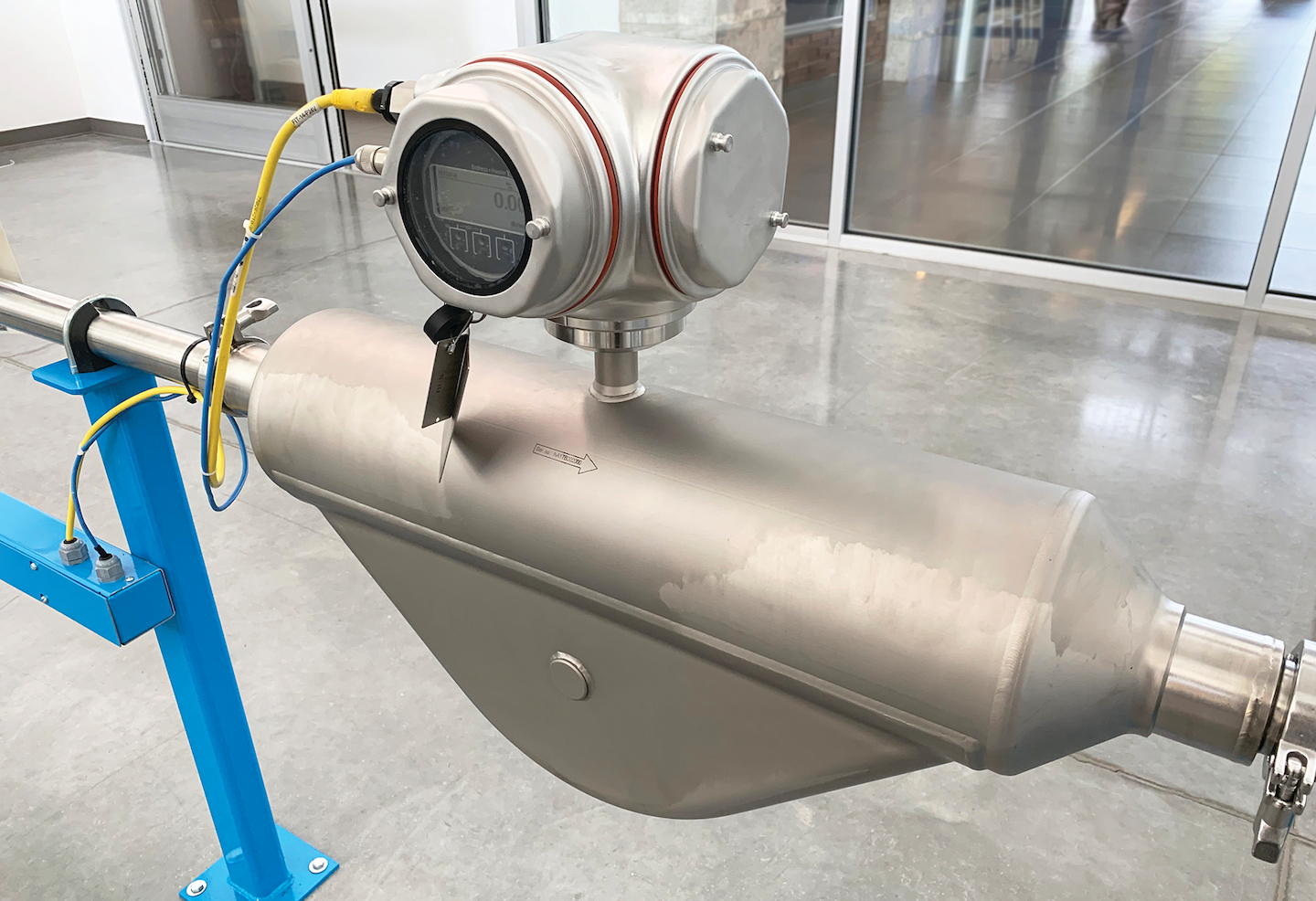 Figure 2. A Coriolis flowmeter, such as this Endress+Hauser Promass, makes multiple measurements that can be used for inline quality control.

A Coriolis flowmeter does not operate properly with large amounts of entrained air, so it has diagnostics to detect this condition. In an Endress+Hauser Coriolis meter, a diagnostic value shows that tube oscillation is in a good range, indicating no entrained air. If air appears in the line, the diagnostic value will change (Figure 3), setting off an alarm to the operator.

A Coriolis mass flowmeter measures the density and flow rate of fluids simultaneously as they flow through its tubes (Figure 4). These devices are based in principle on the Coriolis Effect, which is the deflection of the path of a fluid within its tubes. An excitation coil oscillates the tubes at the first node of their resonance frequency, and the frequency of oscillation changes with the density of the fluid. 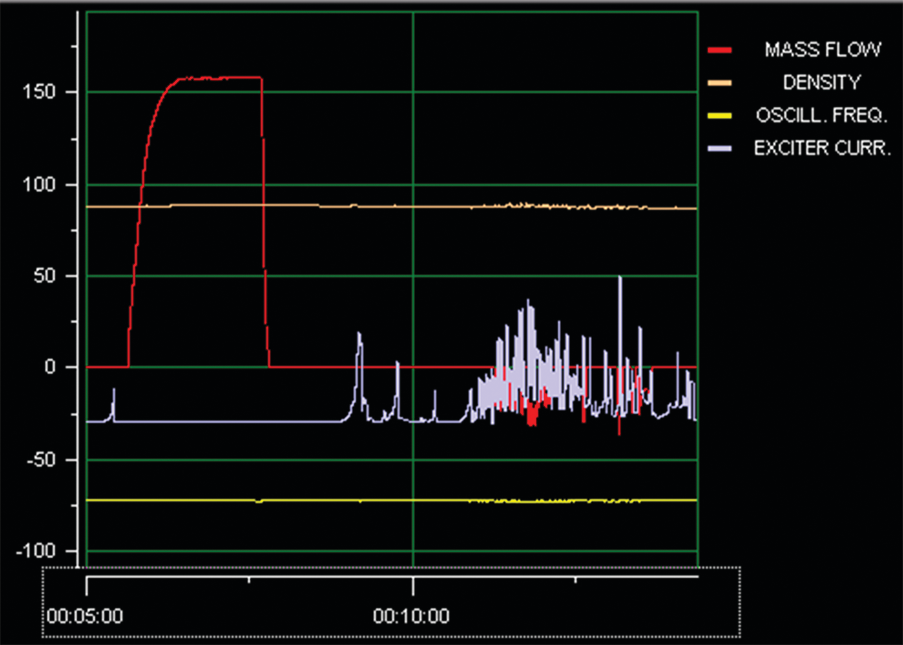 Figure 3. Diagnostics in a Coriolis flowmeter can determine if entrained air is present (purple trace in the figure). This data can be used as an operator alarm and to help during setup.

Initially, when there is no flow, the tubes oscillate synchronously. But as fluid begins to flow, the sensors on the inlet and outlet bends begin to oscillate non-synchronously with a phase shift. Measuring the oscillation frequency provides data to determine flow, mass flow, density, concentration, etc.

The applications described below cover measuring concentration, viscosity and density, but these are only some of the possible on-line quality measurements possible with Coriolis flowmeters.

Concentration measurements are made by breweries, which need to control the sugar content of their wort to determine the alcoholic strength of the beer. The amount of sugar content correlates to degrees Plato (°P); for example, 1°P wort will contain 1 gram of sugar per 100 grams of wort.

In a brewery, after the grains are malted and milled, the mash goes into a lauter tun, a vessel used to separate mash from the wort. Density and concentration measurements are made as the wort leaves the lauter tun.

There are multiple methods1 to measure sugar content, both manual and automated. However, the manual measurement is usually taken after the lautering process is complete, whereas an inline measurement allows for real-time correction of the process, often by automated means via closed-loop control. The end result is reduced waste from bad batches, and reduced time and labor by not having to manually sample the wort. 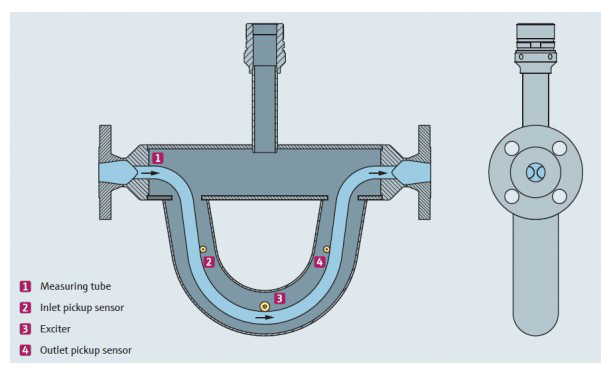 Figure 4. Measuring deflection of the flow tubes in a Coriolis flowmeter allows the meter to measure flow, mass flow, density, concentration and other parameters.

A Coriolis flowmeter measures density, so it can calculate Brix, proportional to the amount of sucrose content in water. This measurement provides a picture of the condition and quality of incoming fruit. For example, hard fruit that is still in solid chunks will show a low Brix. In contrast, a high Brix measurement could indicate overripe, mushy fruit with very little intact solids. Operators or the control system can use the Brix measurement to determine how to process the incoming fruit.

Viscosity of the fruit product is measured to determine end-product quality. Viscosity describes the flowing properties of a fluid, and it depends on the forces acting between molecules. The more viscous a fluid is, the stronger the intermolecular forces. As a result, larger internal resistance has to be overcome to move the fluid or apply a force to it. Viscosity is an indirect measurement of product consistency and quality.

A Coriolis flowmeter can use two simultaneously driven frequencies for measuring mass flow and viscosity. The torsional or viscosity mode uses a higher frequency to induce a shear rate on the fluid (Figure 5) with the shear force on the inside of the tube being a function of shear rate and viscosity. By measuring the drive current, viscosity can be calculated.

Viscosity is usually measured in a lab, under lab conditions. The advantage of measuring viscosity directly in the process is that it’s a true reflection of the process conditions and avoids the delay of taking samples to the lab. This allows for live corrections of the process if viscosity is outside the product’s tolerances, often by automated means. 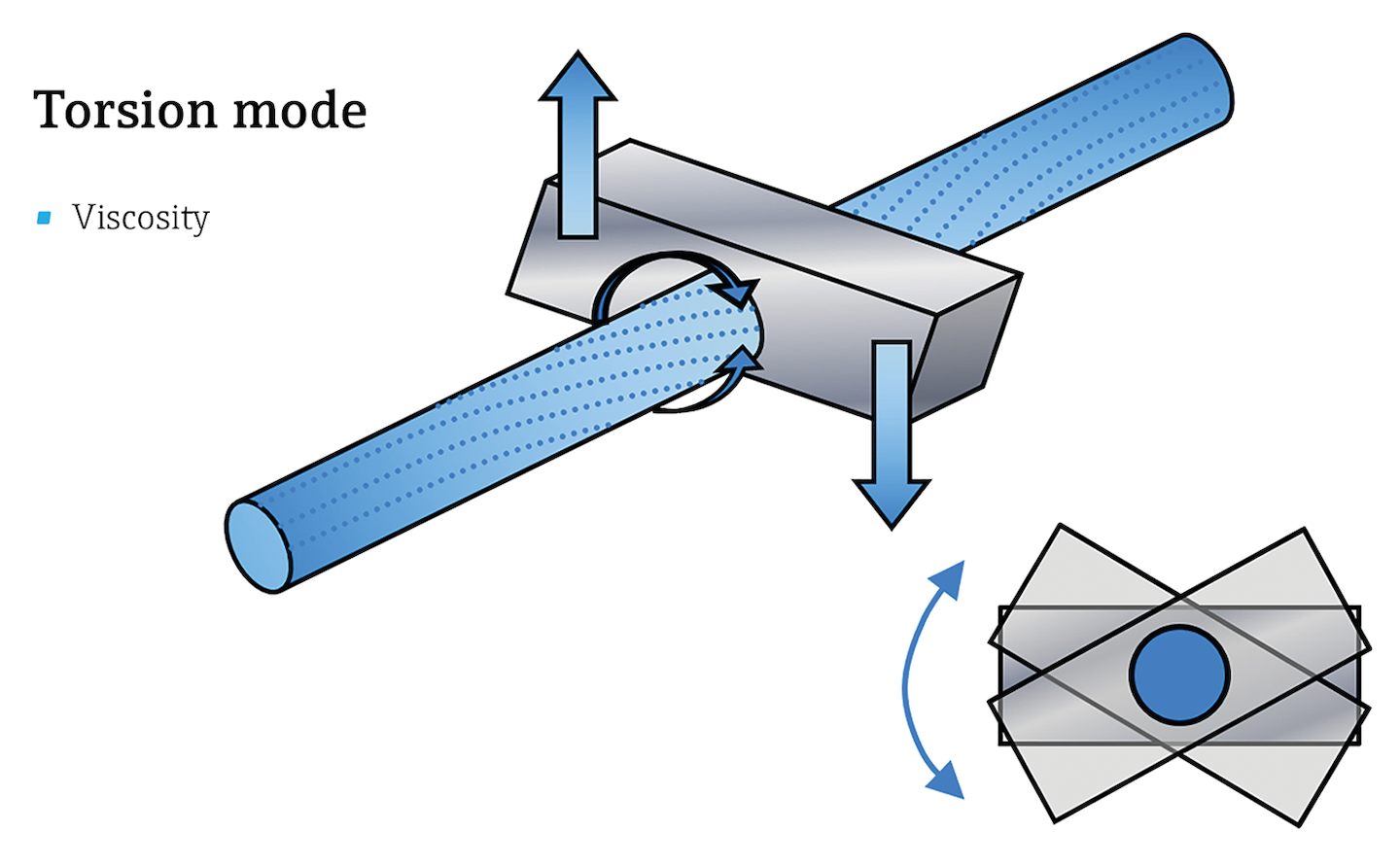 Figure 5. Viscosity is calculated as a function of shear force and drive current.

Food products are often foamed with gases to achieve the desired consistency. This occurs, for example, when ice cream is produced. Gas is injected during the freezing process, trapping microbubbles into the ice cream to give it a creamy texture. This process works with high-fat as well as low-fat ice cream.

Gas content is a significant factor in the overall quality of the final product and is an important process parameter. The increase in volume of the final product caused by the injected gas is known as overrun. Depending on the product, the overrun can be between 20% and 120% for ice cream or frozen products.

A Coriolis flowmeter can be used to make this measurement. For example, the Endress+Hauser Promass Q with Multi-Frequency Technology enables continuous monitoring of the overrun. The density of the liquid ice cream is measured as it’s being transferred to the freezers.

This article only covers how Coriolis flowmeters can be used for inline quality monitoring in food plants. While Coriolis flowmeters are extremely capable, adding additional instruments — such as pH meters, colorimeters, dissolved oxygen sensors and other in-line analysis devices — can help a food plant analyze and control even more of its processes in real time.

A different kind of security blanket

Use of Coriolis-based custody transfer advances with technology

One of the biggest expenses in wastewater treatment operations is the cost of energy to run the blowers and compressors that produce air for the aeration basins.
Staff
Nov 19th, 2014

FCI’s VeriCal In-Situ calibration verification system provides you the ability to perform periodic field validation and verification of your FCI flow meter’s measuring performance without extracting the meter from the pipe or process. .
Staff
Nov 19th, 2014

To manage water flow you must measure water use

Challenges for some, opportunities for others

The oil & gas industry is the largest sector of the process instrumentation market, accounting for 25 percent of revenue in 2012.
Kevin Parker
Oct 1st, 2014
Flow Measurement

Natural gas production in the United States increased in August for the eighth consecutive month, according to just-released figures from Bentek Energy, an analytics and forecasting unit of Platts.
Kevin Parker
Sep 16th, 2014

A new research study from Flow Research, Volume X: The World Market for Flowmeters, 5th Edition, finds that the worldwide traditional technology flowmeter market totaled $2.7 billion in 2013 and is projected to grow to exceed $3.3 billion by 2018.
Staff
Sep 12th, 2014

A new research study from Flow Research, Volume X: The World Market for Flowmeters, 5th Edition, finds that the worldwide new-technology flowmeter market totaled $4.0 billion in 2013 and is projected to grow substantially to exceed $5.7 billion by 2018.
Processing Staff
Sep 12th, 2014

Hot-tap installation, no need for interface software programming and accuracy were among the benefits cited.
Staff
Aug 1st, 2014