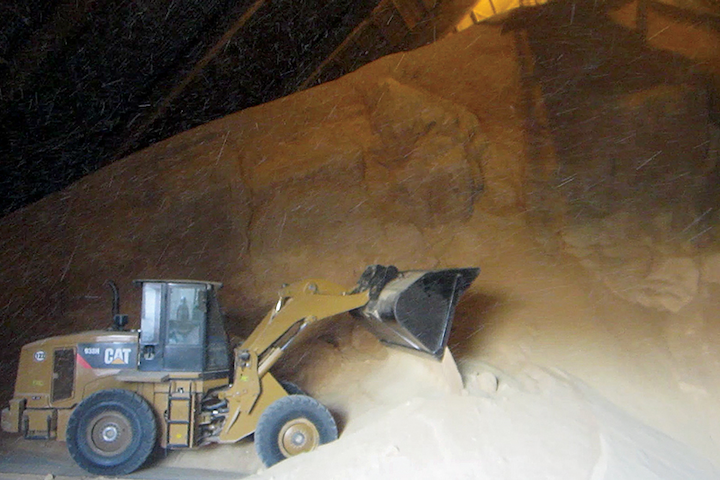 Working inside covered storage with caked material. All images courtesy of Jenike & Johanson

Each year tens if not hundreds of individuals are severely injured, and many are killed, when working in and around bulk solids storage and handling facilities. Silos fail, stockpiles collapse, material that is stuck to bin walls falls off, workers get sucked into hidden cavities and combustible dusts explode. Even if all government regulations are followed — which is not always the case — accidents can still occur, especially given that safety standards are the minimum requirements and it is up to companies to implement only the minimum safeguards.

The term "bulk solids" refers to a collection of solid particles that can vary in size from sub-micron to several meters and that are handled in bulk form, e.g., stored in bins or silos, conveyed pneumatically or by mechanical means. Most industrial plants store and handle bulk solids, whether it is a chemical processing plant, pharmaceutical manufacturing plant, mine or power plant.

Each year tens if not hundreds of individuals are killed when working in and around bulk solids storage and handling facilities. While this represents but a small percentage of all fatal occupational accidents reported by the U.S. Occupational Safety and Health Administration (OSHA) and other government agencies, these accidents often receive more press coverage and, in many cases, are avoidable for reasons explained in this article.

People who work in the chemical industry place a major emphasis on process safety, but an informal poll suggests that death rates in that industry pale in comparison to death rates associated with the storing and handling of bulk solids.

The question that must be asked is, "Why, and what can be done about it?"

The following two examples illustrate the problem. In both cases, one or more workers was killed.

Example No. 1 — Collapse of cement stockpile inside a covered dome

A 150-feet (ft) diameter by almost 100-ft tall dome was used to store up to 45,000 tons of cement at a plant in the northwestern U.S. Normal fill and discharge was via conveyors located at the center of the dome. There were two emergency outlets in the dome’s floor, each of which had a top opening approximately 7 ft2. The first outlet was centered 30 ft from the dome’s center, and the second was centered 30 ft farther away.

Cement had been stored in the half-full dome for at least a year prior to the accident, and some of it had hardened to the point that even jackhammers could not break it up. Center discharge (the normal discharge point) was blocked, so it was necessary to use one or both of the emergency chutes.

A worker on an excavator entered the dome through a large, exterior door and attempted to move cement into the two emergency reclaim hoppers.

The contour of the cement surface inside the dome varied greatly with depths between 10 ft and 70 ft. After working the cement pile for a week, the high pile unexpectedly collapsed on one side of the excavator, and more than 1,500 yd3 of cement flooded from the dome. The cement buried the excavator, suffocating its operator.

Example No. 2 — Sudden release of petcoke and hot water from a coke drum

Petroleum coke, commonly referred to as petcoke, is produced as a refinery by-product primarily through a process called delayed coking. Common feedstocks are vacuum residues and aromatic oils. They are preheated and then pumped in liquid form into a "drum," a large, vertical cylinder (up to 30 ft or more in diameter and more than 100 ft tall) constructed of high-strength steel. The vapor-liquid mixture is converted to coke and light hydrocarbon vapors by exposure to high temperature and pressure over a period of 12 hours or more. The hydrocarbon vapors are removed, leaving only petcoke.

At the end of this cycle, the coke is in the form of a solid mass. Heads at the top and bottom of the drum are removed. High-pressure water jets cut the solid coke mass into lumps of various sizes that fall though the bottom opening into a pit below. It is later transported out of the pit for sale or to a nearby facility for further processing.

One day while an excavator operator was working the pile, a large quantity of petcoke and hot water suddenly — and without warning — discharged into the pit, enveloping the operator and causing severe burns that eventually killed him.

No coke was being cut from the drum at the time of the accident. The operator was attempting to clear the chute buildup/blockage in a portion of the chute that was not visible to him or to individuals standing at the side of the pit. They were all unaware that an unprecedented combination of a substantial amount of coke and hot water was unable to exit the drum until it suddenly released into the pit. 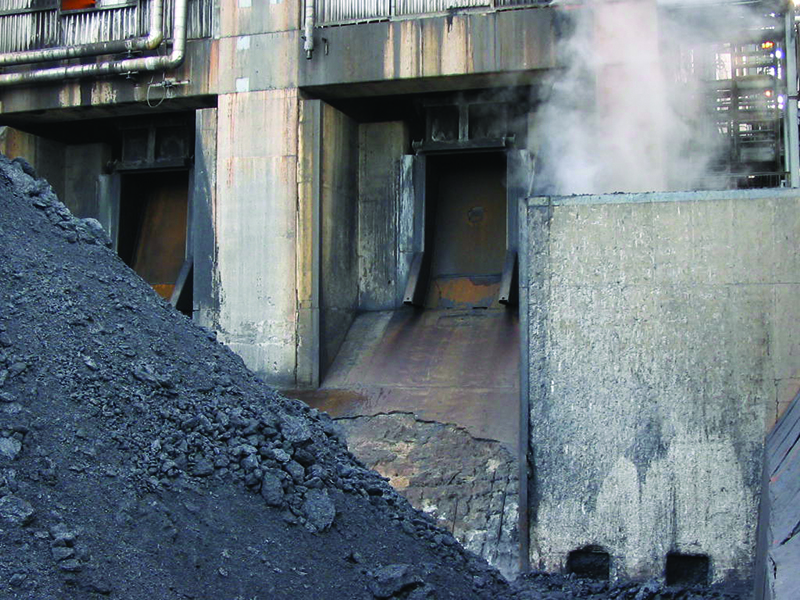 The five main causes of accidents when storing, handling and processing bulk solids are:

1. Engulfment. People are so accustomed to walking on a solid surface (e.g., compacted soil, cement slab, asphalt paving) that they assume there is no danger in walking on the surface of a bulk solid such as inside a silo or in a stockpile. If an arch or rathole collapses, a gate below the surface is opened or a feeder is started, engulfment may occur.

2. Collapse. Most people do not realize the enormous amount of potential energy that is present in a silo, a stockpile or a mass of hung-up bulk solid. For instance, in kinetic energy equivalents, the potential energy associated with the collapse of a 400-ton silo located 30 ft above the ground is the same as being hit by a fully loaded semitrailer travelling at 110 miles per hour. While in this context the danger is obvious, in the form of potential energy it is ignored; hence people continually put themselves and others in harm’s way by engaging in a variety of unsafe activities.

3. Testing invincibility. Many workers think they will have time to react, or that loads can’t be that high, or that they can climb out if there is a problem. This lack of intuition — or wrong intuition — can be fatal.

4. Silo failure. As comedian Rodney Dangerfield might say, "Silos don’t get no respect!" Many people assume that "a tank is a tank"; therefore, it doesn’t much matter whether it stores a liquid or a bulk solid as long as it doesn’t leak. Following this line of thinking to its logical conclusion, the properties of the material stored in a silo and the resulting flow pattern, flow problems and material-induced silo loads are given little consideration.

5. Dust explosion. Workers get used to seeing some dust and slowly accept more and more as normal. They often see housekeeping as either non-value added or not their job, so hazardous levels of dust become accepted. If this dust cloud comes into contact with an ignition source, a sudden and unexpected flash fire or explosion will occur.

What can be done to reduce the accident rate in the bulk solids industry?

People who work in the chemical industry are well aware of the potential for exposure to hazardous, sometimes lethal, gases and liquids. They also know that some equipment can rupture due to over-pressure (such as an internal explosion), so such equipment is designed with extreme care to prevent this type of failure.

Safety awareness is not limited to the chemical industry — it is on the mind of workers and management in every industrial plant worldwide. Indeed, an important aspect of a firm’s social license to operate relates to the organization’s safety performance. Unfortunately, many standard approaches to safety awareness and promoting a safe working environment do not work, as evidenced by the frequency of serious accidents and death involved with storing, handling and processing bulk solids.

While there should not be any disagreement that it is unacceptable in this day and age to have workplace losses caused by stupidity or carelessness, one is left wondering if it is possible that bulk solids are so pervasive that it is impossible to regulate workers into being safe.

Of the five root causes of injury or death in the field of bulk solids handling listed, the first three involve poor personal decisions driven, in part, by lack of awareness of the dangers. The science and associated hazards of bulk solids storage, handling and processing are well known to some (experts in the field, some regulators) but not to others.

Conducting a job hazard analysis (JHA) before performing a task that might result in injury or death is always a good idea. For example, before entering a silo to get material flowing again, stop and consider the possibility of engulfment if a gate or manway is opened or a feeder started.

A JHA consists of three steps:

An extremely useful reference is E. Scott Geller’s The Psychology of Safety.1 The author of this practical handbook teaches science-based and feasible approaches to change what people think (attitude) and do (behavior) to achieve what he calls "a Total Safety Culture." In this culture, everyone feels responsible for safety and pursues it on a daily basis. At work, employees go beyond "the call of duty" to identify environmental hazards and at-risk behaviors. Then, they intervene to correct them. Safe work practices are supported with proper recognition procedures.

Building a Total Safety Culture requires a long-term continuous improvement process. It involves cultivating constructive change in both the behaviors and attitudes of everyone in the organization.

As Geller notes, "This book provides you with the principles and procedures to make this happen. Applying what you read here might not result in a Total Safety Culture; however, it is sure to make a beneficial difference in your own safety and health, and in the safety and health of others you choose to help."

So, how do we drive things to the right by applying some of Geller’s thinking? It starts with more education of the dangers involved in the storage, handling and processing of bulk solids. This is a huge undertaking given that owners, operators, workers, contractors, designers, repair crews, trucking firms, etc., all need to be educated. Articles such as this one hopefully raise awareness of the problems that can occur, but this information needs to be distributed to a wide audience.

Another area that needs more attention is design codes. They need to be more complete, covering in particular as many as possible of the limitations described above. In addition, the differences between the various codes must be identified and resolved as much as possible. The latter is a difficult task, since not all members of code-writing committees have the same level of knowledge. Gaining consensus is a slow process, and sometimes there is a tendency to not make changes that might generate liability for a committee member’s past designs.

One can only hope that the need for education in the dangers involved while storing, handling and processing bulk solids and for improvement in silo design codes is recognized and addressed before too many more tragedies take place. To help combat organizational amnesia, centralized access to historical events is required. Demonstrating that bulk solids-related loss is far from a rare event and flagging the root causes will help ensure that this ceases to be a blind spot and that risk assessments and JHAs are properly documented and fulfilled.

How to choose the most efficient refill design for loss-in-weight feeders
Sharon Nowak
Mar 1st, 2019

Despite the safety and ubiquity of these devices, engineers and specifiers often overlook opportunities for more efficiencies.
Clarence Kreiser
Feb 6th, 2019

A bag-tipping process can be greatly enhanced if a number of precautions are taken early in the design process.
Thomas Lamotte
Sep 17th, 2018

How to clean and sanitize piping in pneumatic conveying systems

Methods depend on the product and process needs
Jonathan Thorn
Mar 19th, 2018

Common issues in batch powder dosing and how to fix them