Switches and other devices that make process automation a reality

The key components of automated processing still rely on switches for setup, configuration and control. 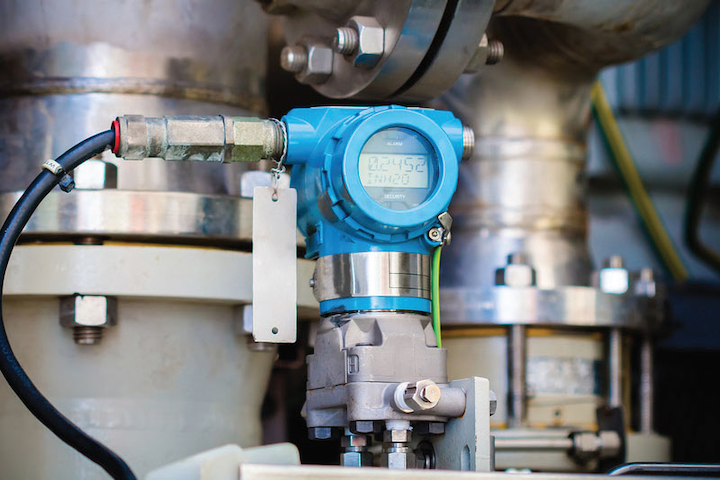 Tact switches are typically found on most process automation sensors such as pressure (pictured), flow and level transmitters. All images courtesy of C&K

The vision for smarter plants and factories and a more efficient, connected environment is not just a concept anymore – it is a reality as we enter the era of Industry 4.0. Now more than ever, a bigger emphasis on regulatory compliance in process industries, increasing adoption of the Internet of Things (IoT) and a shift from traditional production practices to digitized methods, as well as rising demand for proactive solutions that can determine failures – even before they occur – makes connected automation a must-have in the facilities of the future. The market growth speaks for itself: According to MarketsAndMarkets research, the process automation market is expected to be valued at $62.64 billion in 2017 and is likely to reach $88.92 billion by 2023.

The IoT has revolutionized the way we work, and processing plants and factories are no exception. By combining automation devices (the hardware) to information technology (IT) platforms such as manufacturing execution systems (MES), enterprise resource planning (ERP) and business intelligence (BI) systems, greater flexibility and higher efficiency can now be provided to processing companies. Although there is a lot of hype surrounding the shift from manual processes to letting software platforms and cloud networks take the lead, the foundation of Industry 4.0 and process automation rests on the hardware.

However, as the convergence of physical processing systems with the communication and control of the virtual world meld, there are certain considerations that engineers must keep in mind as they design the components and equipment used in today’s processing plants. If done right, these systems can function reliably for many years, and alert workers of bottlenecks and equipment problems to achieve drastically improved flexibility, safety and efficiency. Whether the end application is an oil and gas refinery, a chemical plant, or a wastewater treatment facility, there are several key factors to keep in mind when designing the hardware components these plants depend on.

To work correctly, equipment must be up to code and any problems must be addressed swiftly. However, this is easier said than done when it comes to the processing industry where pipes, tanks and flues can be 50 to 100 feet above ground. Consider a typical oil and gas refinery, for instance. According to the U.S. Energy Information Administration (EIA), of the 141 refineries in operation today, almost 90 percent were constructed before 1975. Piping systems and tanks exposed to more than 40 years of environmental factors and sometimes harsh chemicals and substances are bound to deteriorate; therefore, it is critical for each piece of equipment to work reliably and for plant operators to have the ability to remotely monitor the conditions of critical components. An explosion caused by a small leak in the piping system or an overfilled tank could be catastrophic.

This is an area that is prime for automation technology and remote communication, so operators can detect problems early enough to prevent serious damage. Given the mission-critical function of the equipment and the challenging conditions under which it operates, the switches and other components built into the end products must be able to perform reliably in difficult environments for long periods of time. Engineers must keep this in mind when designing products such as pressure and flow transmitters, tank level sensors, automatic shut-off valves and control systems.

While total green design overhaul may seem like a pipe dream, automation can help plants achieve low-cost operational improvements, which can unlock hidden energy-saving opportunities. Take the water and wastewater industry as an example. According to General Electric, in the U.S. alone, an estimated 2.1 trillion gallons of water are lost annually due to water supply infrastructure challenges, such as main breaks, pipe bursts and unidentified leaks. The pipes, valves and other equipment in many wastewater pumping stations and treatment plants have been around for 50 years or more. In addition, mandates for lower water consumption in many areas combined with increasing use of flushable wipes and other solid materials puts additional strain on these systems. As pumps need to work harder to transport higher loads with less water, the ability to monitor leaks and optimize system pressure and flow rates can lead to potential energy and cost savings.

Various process sensors and transmitters along with remotely actuated control valves can be used to help reduce leaks that lead to water and energy waste, resulting in a more efficient and lower cost system. With the addition of remote communication capabilities and automatic monitoring, performance data can be gathered and stored, which can be used to track and proactively address issues before they result in costly shutdowns.

The prevalence of chronic diseases, an aging population and greater health care awareness has significantly driven growth in the pharmaceutical industry, especially in North American markets, according to Persistence Market Research. Process automation plays a critical role in drug manufacturing due to product safety concerns, regulatory requirements and cost efficiency. Concerns such as contamination, proper batch size and constituent composition and controlling critical processing variables, such as pressure and temperature, can cost the drug manufacturers both financially and reputation-wise and have potentially life-threatening implications for patients.

In the absence of process automation devices, plant operators must manually monitor performance and maintenance issues, which can result not only in operational inefficiency, but also in greater opportunity for human error and dangerous mistakes. Automation devices such as sensors, transmitters, safety and control systems improve compliance and minimize inaccuracies by connecting equipment to electronic systems, so operators don’t have to monitor and react to sudden, unexpected changes in the process. Accuracy, consistency, safety and reliability are the name of the game when it comes to process automation in the pharmaceutical industry, and the switches used to power, program and operate these devices must be designed to perform at the same level.

Several key devices are typically found in almost every process automation environment including flow transmitters, pressure transmitters, panel meters and valve actuators. These devices can measure, monitor, detect and even anticipate problems, and thanks to Industry 4.0, can communicate this data to remote locations via protocols such as EtherNet, HART, and PROFINET.

Flowmeters are important for measuring the flow of liquid, gas and other substances and are used across industries from food and beverage to oil and gas to pharmaceutical plants. Because the effects of pressure, temperature and other factors will influence the measurements being taken, the specific application requirements need to be considered before choosing the best flow transmitter for the job. Accuracy, durability and ease of use are key when it comes to flow transmitters, so components such as the miniature tact switches used to operate the displays or dual in-line package (DIP) switches used to configure the security and alarm settings need the ability to perform reliably under harsh conditions for many years.

Pressure transmitters can measure gauge, absolute or differential pressure, can be wired or wireless, and come with various mounting options. Many modern pressure transmitters used in process automation applications are multifunction devices, which can also output data on mass and volumetric flow rate, liquid level and even temperature using an integral thermowell. As with flow transmitters, the specifics of each application including mounting considerations, ambient effects, environmental requirements and space availability need to be considered in order to select the appropriate device.

Today’s modern panel meters, which come in both digital and analog form, are tools for displaying essential process information. Meters accept direct inputs from pressure, flow, level and temperature sensors and can also display voltage and current information to monitor the performance of electrical equipment. These devices have the capability to trigger an alarm if process variables are outside preset limits as well as send performance data to a computer or data acquisition system. Typical applications include tank level measurement for chemical plants, oven temperature monitoring in the food processing industry and current monitoring for pump motors in oil refineries and water treatment plants.

In almost every process automation environment, there are hundreds of valves that control the flow of liquids, gases and solids through a network of piping systems, tanks, mixers and other equipment. In response to signals from various process sensors, the supervisory control system remotely opens and closes these valves according to the needs of the process as well as for safety considerations. Given the location of most of these valves, they are generally operated by a remotely controlled valve actuator that incorporates an electric motor, gear system, position switches and associated electronics. The snap-acting switches used to monitor the valve position in these actuators need to handle high currents, stand up to tough environmental conditions and last for many cycles. 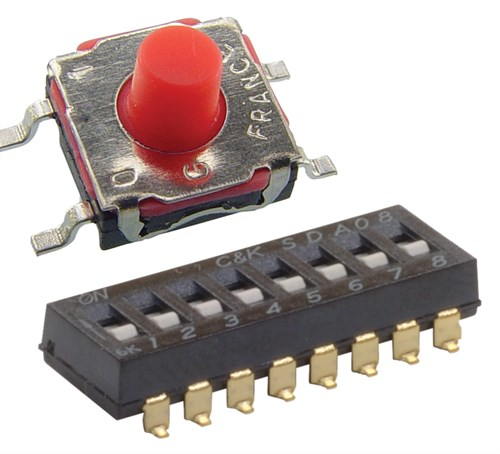 Even with high-volume processing being accomplished more by automatic equipment and less human interaction, this does not equal less switches involved in the process. The key components of these processing systems include sensors, actuators and control systems, which still depend on a variety of high-performance switches to interact with technicians and operators for setup, configuration and control. Relative to Industry 4.0, these modern plants will depend on a variety of hardware components including embedded computers, machine-to-machine (M2M) communication modules, as well as gateways and other communication equipment. Sensors, which monitor machine function and performance, as well as the switches used by operators to interface with each device, still serve as the foundation for all this modern hardware.

Below are a few examples of some of the switches and components that are commonly found on equipment used in the process automation industry:

Process automation can be a powerful way to increase efficiency, safety and compliance, as well as to reduce human error inherent in manual processes. This can be especially effective in industries where equipment and infrastructure is meant to last for a long time. However, it’s clear that the technology launching us into Industry 4.0 is only as powerful as the hardware and components powering it.

Mike Bolduc is global marketing manager at C&K, where he is responsible for leading market strategy and global growth efforts for the industrial and medical business segments. Bolduc has an engineering and business background and more than 25 years of diversified experience in the automotive, semiconductor, HVAC, aerospace, industrial and medical industries working for large global corporations such as Texas Instruments and Stanley Black & Decker.

As demand for nonferrous metals grows, so does the demand for digitalization of processes.
Konstantin Gorbach
May 22nd, 2019